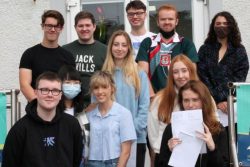 Sixth Form students at St Clare’s Porthcawl celebrated the school’s track record for outstanding results at A-Level, having achieved an outstanding 61.4% A*/A grades and 86.4% A*/B grades, securing places at the most competitive universities despite a second year’s challenging lockdown circumstances.

St Clare’s has been in the top 5% of top performing A-Level schools in the UK for the last three years and anticipates this to be the same this year. The 2021 A-Level grades build on the excellent results seen in previous years with St Clare’s achieving a clean sweep of 100% pass rate across all subjects, highlighting the school’s strength in both academic and creative fields. 100% of students gained a place to study at their first-choice university destinations, including many in the Russell Group.

Head Student, Theo Quantick secured 3 A*s in English Literature, History and Graphics.  He joined St Clare’s in Year 7 and chose to stay for Sixth Form because,  “I felt St Clare’s study environment was one that I enjoyed and could personally thrive in. I also found the teaching styles of my tutors during GCSEs excellent so I knew I was in very safe hands when it came to the more challenging A-Level syllabus.” Theo has accepted a place at St Andrew’s to read English Literature and hopes to become an auteur. He added “I’ve got a real love of cinema and hope to eventually write and direct my own films”. 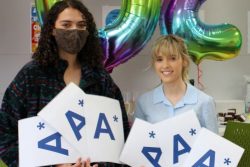 Sixth Form Prefect, Amelia Jenkins, secured 3 A*s in English Literature, Spanish and French. She joined St Clare’s in Year 9 and has accepted a place at Durham University to read Modern Languages and Cultures.  She recommends St Clare’s Sixth Form, “The class sizes are very small, meaning you have your tutor’s full attention. It’s also easy to get to know people quickly. The school itself is on a beautiful campus with many facilities for sports, drama and brand-new science labs.”

Carys Lock secured 3 A*s in Mathematics, Geography and Art & Design (Textiles). She joined St Clare’s in Year 1 and is embarking on a degree in Physical Geography and Oceanography at Bangor University.

Ben Fodor, secured 2 A*s and an A in Biology, Business Studies and Chemistry.

Darcy Buchanan-Burbidge secured an A* and 2 As in Mathematics, Chemistry and French. Darcy joined St Clare’s for Sixth Form and has accepted a place at the University of Manchester to read Mathematics.

Sixth Form prefect, Emily Smith, secured an A* and 2 As in History, English Literature, and Music. Emily has been at St Clare’s since Reception and said she chose to stay on for Sixth Form because, “With small tutor groups, each student gets as much attention as they need/ask for. Staff are always willing to explain how to better your grades and support with university applications is also substantial.” Emily is embarking on a degree in History at University of Exeter.

Kym Zhang secured an A* in Biology, and two As in Chemistry and Mathematics. She joined St Clare’s in Y9. The eldest of four sisters, she has accepted a place at Queen Mary, University of London to read Biochemistry. Two of her sisters are already at St Clare’s with the youngest due to follow in her sisters’ footsteps.

“We are absolutely thrilled that our students have achieved such outstanding results. The pupils and teachers have worked extremely hard in very challenging circumstances again this year. It is a pleasure to celebrate with them all today. We are delighted that so many students have secured places at their first-choice universities, to read competitive subjects such as Mathematics, Biochemistry and Optometry.

The pupils have shown great determination and resilience this year. They were faced with the uncertainty of the cancellation of examinations, replaced with a robust, stringent internal examination process. They have been a fantastic year group who have shown leadership, positivity and commitment. We wish them all the very best as they take the next step on their educational journey.”

100% of students gained a place to study at their first-choice university, including top Russell Group destinations such as St. Andrew’s, Cardiff, Durham, Exeter, Manchester, Nottingham and Queen Mary, University of London.