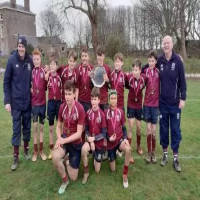 Congratulations to our U13 boys who brought home the Travtel Sevens Rugby Salver from St Michael’s annual Festival of Sport in Jersey with a score of 26 – 7.  This is the second time Belmont has been victorious in the rugby sevens event following a tournament win in 2018.    Six of our team were also selected to play for an England A team and six played for an England B team in a final England v Jersey rugby match on the last morning of the tour, which England won convincingly.

Rugby was just one of the sports that our U13 pupils took part in on their Jersey Tour with several schools from Jersey, Guernsey and England participating in football, indoor/outdoor hockey, rugby and netball matches as part of the festival.

Our girls had their best performance in the hockey tournament, where they finished sixth.  They scored some amazing goals and only lost 2 – 1 to the eventual winners, St Michael’s Jersey.  In netball, the girls did Belmont proud.  They kept fighting until the end and played some superb netball showing true grit and determination.

In the boys’ football, the A team won two, lost three and drew one game finishing fourth overall.  The B team won one, drew two and lost one game qualifying for the final, which they lost 0 – 1 and so finished as runners up.

We would like to thank our staff members and parents who accompanied the tour and provided invaluable support.