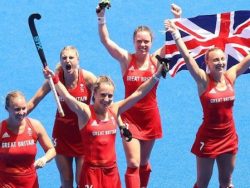 Grace celebrating with her team mates in Tokyo

Grace joined Kent College, Canterbury in the Junior School and stayed all the way through to the Sixth Form. She was successful in achieving 3 A levels: Physical Education, Chemistry and Spanish and went on to graduate from Canterbury Christ Church University and the University of Maryland (Washington) with degrees in Physical Education and Sports Science and Education.

Hockey has always been her first passion and whilst at Kent College, Grace played for the Under 18s and 16s, helping them to national finals in both outdoor and indoor competitions and competed with the Canterbury Ladies first team for many years. She was encouraged to play hockey from an early age by her mother Claire Balsdon, who taught Sport at the school for over 20 years.

Grace was selected for the Women’s GB Hockey Squad in 2014 and has been a member of the team ever since; playing in the Commonwealth Games, World Cup and European Championships with a total of 89 international caps for Great Britain and England.

Everyone at Kent College watched in delight as Grace scored the game winning goal against India for Great Britain to win the Bronze medal in the Women’s field hockey at the 2020 Tokyo Summer Olympics.

Grace stated after the match ‘It was a dream come true.’

Pupils and staff are really looking forward to welcoming Grace back to Kent College this autumn for one of her regular coaching visits and of course to take a look at that Olympic medal.