CLC PUPILS’ EXPERIMENTS TO BE LAUNCHED INTO SPACE 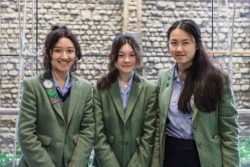 Larissa, Sophie and Ashley submitted their proposals as part of the Cubes in Space global engineering design competition. The competition invites young people aged 11 to 18 years to design and propose experiments in 4cm cubes to launch into space or a near-space environment on a NASA sounding rocket and zero-pressure scientific balloon.

The aim of the experiments is to contribute to solving real-world Earth or space-based problems. The students’ experiments will explore the effects of radiation on the tensile strength of bacterial cellulose; the rate of growth of prickly pear cactus seeds; the survival rate of plants with lignin in contrast to plants without; the tensile strength of plant-based and synthetic fibres; as well as the effect of magnetic fields on the ability for magnetotactic bacteria to remove iron ions from industrial waste water.

Ashley, 17, said: “For the last six months, we have worked on writing research proposals to submit to the programme. Globally, only 120 experiments are chosen each year, so we were delighted to hear that five of our proposals have been accepted for flight on the research balloon.”

After the flight, the cubes will be returned to the team so that they can collect the data and analyse the results of the experiments.