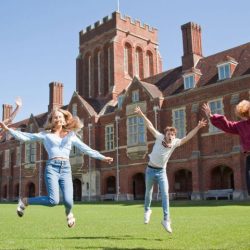 Pupils at Eastbourne College celebrate another year of strong GCSE results, following the A-level uptick last week. GCSE and A-level results at the school have risen for the third year in a row, with the proportion of top grades increasing each year.

This year’s set of results reflect a combination of hard work from pupils, parental support, year-on-year improvements in teaching and learning strategies, and the integrity of grading.

‘Year 11 pupils have worked their socks off under challenging, changing conditions, to achieve a set of results of which their parents and teachers can feel proud. Our continued exam success demonstrates that the targeted investments in teaching and learning we have made in recent years are paying dividends. Exam grades have risen across the board in line with expectations: a testament to an educational community dedicated to the pursuit of excellence. Amid all the hype and confusion surrounding this year’s exam season, pupils should be congratulated for the excellent outcomes they have to show for their diligent work. Our healthy, balanced approach leads to pupils fulfilling their academic potential while developing body and mind through community service, creativity, sport, and teamwork,’ said headmaster Tom Lawson.