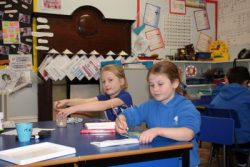 A Cognita education is about much more than academics.

Equally important is equipping young people with the confidence and resourcefulness that prepares them to grow, thrive and find their success in a fast-changing world. That’s why education extends far beyond the classroom.

All our pupils at St Clare’s take part in our bespoke Enrichment Programme once every half a term. They take part in a wide range of activities to broaden their educational experience.

Our staff worked super hard to deliver a programme of activities. In the Prep School their theme was the ‘Environment’ and in the Senior School and Sixth Form it was ’Creativity’.  We have uploaded as many photos as possible in the gallery to showcase the wide range of activities.

Our Prep pupils had a treasure hunt to find letters of the alphabet in the school grounds. It was a house competition. The pupils then had to use the letters they found to make as many words as they could. The bigger the word (spelt correctly) the more points they gained. If they wrote any ‘environmental words’ they could also gain bonus points. The house with the highest tally in the prep won a bamboo toothbrush each as a prize.

Year 7 were studying Greek myths and legends and they recently read the myth of Pandora’s Box. Mrs Burns asked them to visualise what some of the things that came out of the box would have looked like (the evils of the world) such as cruelty, pain, sadness and disease (but also hope). Next time, pupils will be comparing the story to that of the Genesis creation in the Bible.

In Year 8’s Biology class with Mrs Lambert, pupils were asked to draw the outline of a pupil’s body on flipchart paper and then decide where to place the pictures of various organs on their drawing and label everything correctly.

Year 8 created stop motion animation on their topic of rainforests in Geography.