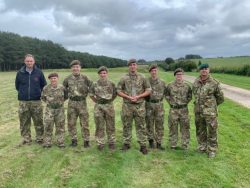 The championships, which were held at Yoxter over the weekend, saw the team compete in both team and individual shoots over 300, 500 and 600 metre ranges against other Combined Cadet Forces (CCF), Cadet Force Schools, Army Cadet Forces and Air Training Corps.

Their achievement was all the more impressive as they were complete beginners, going from novice to competitors in ten days under expert tuition.

Sam Pepler said, “I think the team’s achievement is outstanding. Getting the cadets from seeing a Cadet Target Rifle for the first time only nine days prior to the competition, to shooting that  successfully is an incredible achievement and a testament to the hard work and skills of both the cadets and, crucially, our CCF senior leadership. Under their watchful eye and years of combined experience, the team manifested into competent, effective and skillful shooters and I speak for the whole team in saying how grateful we are to them for their guidance.”

Millfield’s Registrar for Admissions, James Postle coached the team prior to the event. James is the Director of the British Cadet Rifle Team (Great Britain U18) and has previously coached Epsom College to seven national titles at Bisley. James is a competitive international target shot, representing England in Canada in 2019. He was joined by Millfield CCF staff Capt Craig Middleton and WO2 Rob Seeley who supported the team.

He said, “I was very impressed with the team’s focus and determination, they have achieved amazing things in a phenomenally short space of time. The opposition all had several years of experience in contrast to our team which makes the result even more remarkable.”

The team have qualified for the Bisley Cadet Force National Finals held at Bisley.