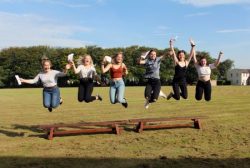 In a year of uncertainty, Shebbear College A-level and BTEC pupils have achieved an outstanding set of results with a pass rate of 100% and the vast majority of pupils securing places at their first choice of university. Almost 50% achieved A* – A with an impressive 76.9% gaining A* – B and 92.9% scoring A* – C.

Deputy Head Girl, Elizabeth Flaherty, from Holsworthy in Devon achieved an incredible four A*s in English, Chemistry, Maths and Physics and has secured a place at Mansfield Colllege, University of Oxford, where she will study Theology & Religion.

“It’s been kind of stressful because you don’t really know what’s going to happen, with everything going on.” said Lizzie “I didn’t expect to get these results at all – so I’m really happy!”

Another of those to have excelled is Will Cunningham from Okehampton, Devon, who was awarded two A*s and an A in Economics, Physics and Maths and is off to study Mechanical Engineering at the University of Bath. Will has juggled his A-level studies with his duties as Deputy Head Boy and Captain of the Shebbear 1st XV Rugby Team so has had a busy two years!

“It’s been weird because I didn’t know what to expect.” said Will. “I was actually quite chilled out about it – I think if I had taken the exams and wasn’t sure how they had gone, I would have felt quite nervous, but I’m just really pleased! There haven’t been many sleepless nights – just the one!”

Head Girl, Jessica Biggs, achieved A* A* A in Biology, Geography and Chemistry and an A* in her EPQ and is looking forward to studying Human Geography at the University of Leeds. Meanwhile her twin brother Toby gained Distinction & Merit in Sport BTEC and Merit in Creative Media BTEC and is taking a gap year before continuing his studies – he has an unconditional offer at the University of Lincoln. The twins, from Bude in Cornwall have gone through their entire education together so far and Jessica commented “It’s going to be so weird not being together, but we’ll still be relatively close so we’ll definitely still see each other.”

Across the board, Shebbear students are pursuing a huge range of subjects at degree level –  from Aeronautical Engineering, Economics, Business Studies, Mathematics and Geography at Russell Group Universities to studying Music at Trinity Laban Conservatoire of Music and Dance and the Royal Welsh College of Music and Drama.

William Harding, also from Bude, is off to the prestigious Norland College in Bath with the aim of pursuing a career as one of the first male Norland Nannies, while Charlotte Nethacott from Buckland Filleigh is delighted to have been awarded a bursary from the Dartington Cattle Breeding Trust to enable her follow her dream of studying Agriculture at Harper Adams University.

“I am absolutely delighted with this year’s academic results and incredibly proud of all the Upper Sixth pupils, who have shown such positivity and resilience in an uncertain and difficult year, that was entirely unexpected at the end of their Shebbear journey” said Caroline Kirby, Head at Shebbear College. “Their A-level achievements this year are outstanding and I am so pleased that so many of our pupils have secured places at their first choice of university. We must remember too, the wealth of co-curricular activities that our pupils have also managed to fit in around their academic studies – from the Ten Tors Challenge, Duke of Edinburgh, playing in our top Sports Teams and achieving top marks in Music and LAMDA examinations. They really are an outstanding year group; it has been a pleasure to have them at Shebbear, and I wish them all the very best of luck for the next chapter of their lives as they become successful Old Shebbearians.”