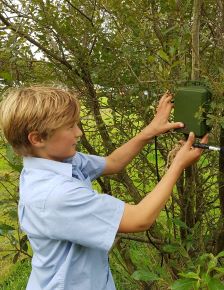 The Pledge for Nature, supported by The National Lottery Heritage Fund aims to help nature’s recovery across the North Devon UNESCO Biosphere.

The group, made up of Sixth Formers, and under the watchful eye of Head of Biology, Noah Shawcross, started the group to try and encourage great biodiversity on the school’s stunning 90-acre campus and, at the same time, educate other students about the need to protect our environment. This year the school, based close to Exmoor National Park in North Devon, created its first ever Environmental Prefects who help lead the school’s work on biodiversity and sustainability.

Headmaster, Phillip Stapleton, is extremely proud of the group’s achievements: “Since its inception, WEBS has seen perceptions and behaviours change in school, as well as in the biodiversity on the campus. Single use plastic has been virtually eradicated onsite, the school café now sells healthier food with less plastic and the school has positioned more recycling bins around the campus to encourage students to actively recycle. Members of WEBS have held meetings with the Bursar, SLT and governors on a number of occasions to see where the school could reduce greenhouse gases and a second biomass boiler is currently being installed, meaning that virtually all the school’s heating is now from this source.”

To kick off their initiative they asked the school’s Artist in Residence, Joseph Witchall, to design a logo, before presenting their objectives to the Senior Leadership Team and Governors. These included improving the biodiversity of the school campus; reducing food and packaging waste; reducing greenhouse gas emissions within the school and surveying the pupils to find out their attitudes to waste and sustainable food as well as leading assemblies to encouraging a more caring approach to our environment.

In consultation with the school’s Head Groundsman, Baz Norden, two wildflower meadows were developed by the group, who enlisted the help of students from the Prep school up to Year 9 to bring on the wildflowers from seed in their classrooms. On a recent open day, in conjunction with the Art Department member of WEBS helped make seed bombs, with seed collected from the wildflower meadow and in a recent staff training session on biodiversity and sustainability all staff were given a homemade packet of wildflower seed. Both of these projects took inspiration from the Moor Meadows project which is a community initiative whose members are interested in conserving, restoring and creating wildflower meadows, from a meadow in the garden to many acres in the landscapes.

Over the past two years 500 new trees have been planted and all age groups within the school have been involved, including Year 7s, who have been doing the work as part of their John Muir Awards, as well as the Prep school children. The trees were kindly donated by the Woodland Trust and are part of the Queen’s Green Canopy which marks the Platinum Jubilee of Elizabeth II.

The award from the UNESCO North Devon Biosphere ‘Pledge for Nature’ is a fantastic way for the WEBS team to be recognised for all their hard work and provides a fitting legacy when they leave the school and hand the baton over to the next members of WEBS.