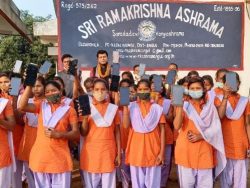 A young pupil at Wellington College in Berkshire, is honoured with The Diana Award for going above and beyond in their daily life to create and sustain positive change.

15-year-old, Ishan Kapur, a boarder from New Delhi, India has been recognised with the highest accolade a young person can achieve for social action or humanitarian efforts – The Diana Award.

Established in memory of Diana, Princess of Wales, the Award is given out by the charity of the same name and has the support of both her sons, The Duke of Cambridge and The Duke of Sussex.

An important part of a Wellington College education is a commitment to service and helping others. This is exemplified by the number of Wellington pupils who have been recognised by this award. It is the third time a pupil from the school has won and the second, consecutive, year. In 2020, Lottie Leach won for making a significant impact as a mental health activist.

Ishan has been recognised for his work with the Sri Ramakrishna Ashrama New Delhi, India. After first volunteering to help a local school access uniforms for marginalised girls, Ishan has set an inspirational example by helping others in education. The global pandemic has not stopped him from supporting others in their education, including remote tribal communities and children of migrant construction workers in his neighbourhood. Ishan devised and delivered an ambitious campaign to fundraise £5000 and collect almost 100 laptops and tablets for teachers and students, whilst also ensuring everyone had an online connection to access learning during the long nationwide lockdown. His compassion and dedication have enabled young people to continue their education despite many obstacles. Ishan is an outstanding example in his community.

‘It feels amazing to win this prestigious award. When COVID hit, I wanted to do as much as possible to help the pupils at Sri Ramakrishna Ashrama, especially the children in the older years who had missed a whole year of school and had important exams.They have been so grateful for the tablets and it has helped them to focus on their studies.’

‘We congratulate all our new Diana Award recipients from the UK and all over the globe who are changemakers for their generation. We know by receiving this honour they will inspire more young people to get involved in their communities and begin their own journey as active citizens. For over twenty years The Diana Award has valued and invested in young people encouraging them to continue to make positive change in their communities and lives of others.’