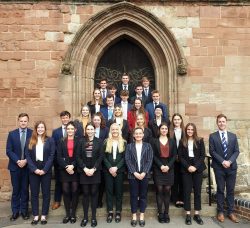 Following on from an extensive application and interview process, Mr Doodes was delighted this week to appoint the new School Monitors for the 2021 – 2022 academic year.

School Monitor is a prestigious role here at King’s and one in which students can really show their most positive attributes.

Monitors at King’s are just one of the many leadership opportunities offered at King’s Sixth Form. Monitors are highly regarded and provide a positive role model for other pupils. Their role is based on keeping the school running at its best level of quality and tradition. Monitors privileges include dinners, processing in college Hall assembly and weekly monitors lunch to name a few.

Monitors receive training both during the Lower Sixth and Upper Sixth and are given information on their roles and responsibilities and a chance to develop their understanding about, and different styles of, leadership. This also includes practical activities where they learn how to manage teams and start to understand their strengths and weaknesses as a leader and their own individual style. You can read about last years monitor training day here.