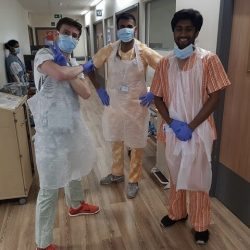 Wellington Upper Sixth pupil Evie Campbell often spends her holidays working at The Fashion Workshop, an Ascot dressmaker. When owner Lynda Yong and designer Catherine Prevost were approached by a local consultant who needed 88 scrubs for Heatherwood Hospital, Evie decided to not only organise sewing volunteers but also help source fabrics and cottons from the local community. She was delighted when the very first donations came from Mark Abbott, an OW who founded Abbott & Boyd, a London-based interior design company.

As the pandemic worsened many other hospitals such as Wexham, Frimley Park, and St Peter’s heard of their work and asked for scrubs: it was estimated that over 5,000 were needed. Evie and her team had an overwhelming amount of support from the local community (including many Wellingtonians and members of staff!) who volunteered their time and skills; at one time Evie was coordinating over 300 amazing volunteers via email, text and phone. Evie’s mother, Mellony also got involved: an embroidery off-shoot of her company Finer London was put to work to embroider hearts on all the scrubs, ensuring that front-line NHS staff would recognise how much love and support they were receiving from this amazing army of volunteers.

They even caught the attention of larger companies such as John Lewis and Hobbycraft who donated fabrics, and the Workshop was featured on Channel 4’s Steph Show, the BBC and Ross Kemp’s ‘On the NHS Frontline’ thereby raising even further awareness.

Evie says, “I have had so many people contact me asking to help, whether by cutting fabric and sewing or simply raising awareness and spreading the word among their community. It goes to show how kind, caring and selfless Wellington students are”.

Please follow their progress on their Facebook, twitter and Instagram pages called ’Scrubs Glorious Scrubs’ https://www.facebook.com/scrubsgloriousscrubs/ which gives updates on the project as well as seeing the final products in use on the front line in hospitals.