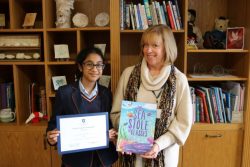 Ankara Prabdial, a pupil in Year 8 at St Swithun’s School in Winchester has become a published author with her book The Sea Stole My Glasses.

The picture book, written and illustrated by Ankara was inspired by her concern for the environment and by a particular incident that happened to her on holiday when she lost her glasses whilst playing in the sea. Ankara wrote the book for her younger brother who suggested that the crabs might have picked up her glasses. With help from Mexican-based coach Yeimi Zarate, Ankara illustrated her book before sending it to Amazon for publishing.

The St Swithun’s school community has been celebrating Ankara’s success by awarding her a St Swithun’s Chair of Council Commendation for her book. She has also been showcased as a role model for younger children in the prep school where only a few years ago she was a student herself. She read her book to them during an assembly, answered questions from a panel of children and signed copies of the book for each class.

Ankara said: ‘I am incredibly excited about having my book released. Receiving a commendation made me feel very proud. I hope to publish another book soon as part of a series with an environmental theme.’

Headmistress of St Swithun’s Jane Gandee said: ‘We congratulate Ankara on bringing her vision to reality. Perhaps the most remarkable aspect of her achievement is that it required significant levels of perseverance as it took her well over a year to write, illustrate and publish her book. We eagerly anticipate the next instalment.’

The Sea Stole My Glasses is available to purchase from Amazon.

Image: Ankara Prabdial receives a commendation for her book from Chair of Council, Alison McClure