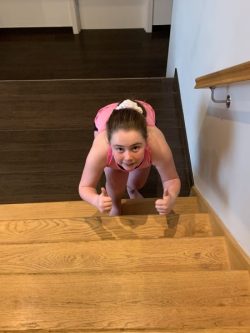 Burgess Hill Girls pupil Zoe Cheal has completed the equivalent of The Three Peaks Challenge by running up and down her stairs 1,520 times, raising over £3,000 for the Whitehawk Foodbank.

Zoe’s inspirational challenge all started with a newspaper article recommending the fitness benefits of running up and down your stairs three times a day. Zoe decided to give it a go and whilst doing so it occurred to her that she could climb the equivalent of a mountain. Having already climbed two of the ‘Three Peaks’; Snowdon and Scafell Pike but not yet Ben Nevis, her family suggested she should try and complete the equivalent of the Three Peaks Challenge.

The combined height of the Three Peaks is 3,408 metres, Zoe worked out she would have to run up and down her stairs 1,520 times. She started the challenge at the start of the February and completed it in twenty days. As it was a lockdown challenge, Zoe decided to seek sponsorship and raise money for a local charity, the Whitehawk Foodbank in Brighton. She raised £3,245.

Zoe is now looking forward to the easing of lockdown.

“It has been hard not being able to connect with friends at school, although we have managed to have lots of fun on Facetime. One good thing about lockdown is that it has bought my family even closer together, hopefully in the future we can all complete the actual Three Peaks together.”

Burgess Hill Girls Head Liz Laybourn could not be prouder of Zoe’s achievement.

“Our pupils never fail to surprise me in their willingness to challenge themselves and support others. Zoe’s achievement is a great example to us all.”